Over Christmas my 8 year old son received 2 “salt water powered toys”.  We built both of them before the new year came around. 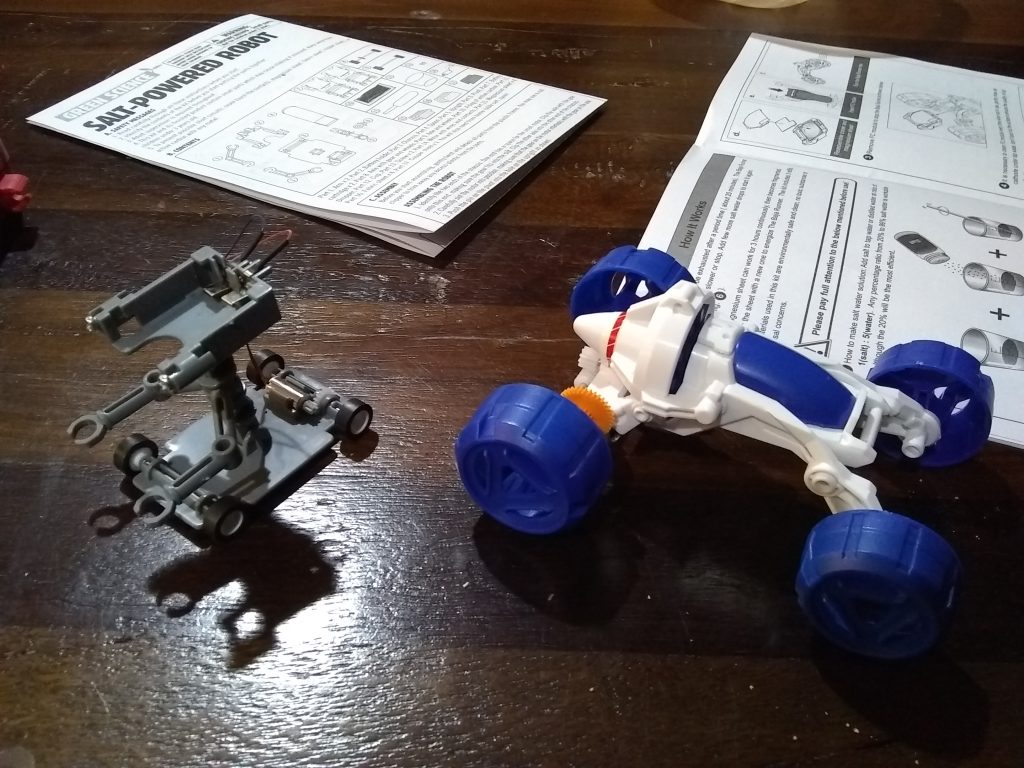 The first toy that we built was the “OWI – Salt Water Fuel Cell Baja Runner“.  This little guy: 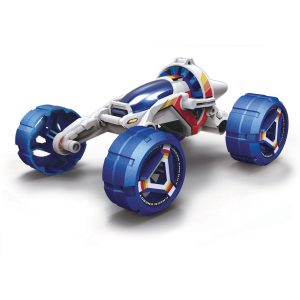 This car was relatively easy to put together, as it is mostly just a snap-together plastic model.  My son was able to do about 50% of the build by himself.  There were five main areas where adult assistance was needed:

I was quite amused to find out that both these kits are not actually “salt water powered”.  Rather, both have you construct a battery where salt water is the solution of the battery.  Both these toys are electric toys – where the primary electrolyte is a magnesium plate.  Personally, I think this is awesome!  I would have been much more excited about these kits if they had been labeled as “build your own battery” instead of “salt water powered”. Apparently the toy marketing team does not agree with me.

Now, the challenge with the Baja Runner is that you need to disassemble and reassemble the battery any time you want to add salt water to it.

Once it is all up and running – it is fantastic!  The car zips along at a great rate, and runs for a surprisingly long time off of a battery.  The car itself has a tiny motor.  Testing the battery showed that, impressively, we were getting about one volt out of it.  My son had a ton of fun playing with the car as it screamed around our house.

You should be aware that it will slowly corrode the magnesium plate that powers the battery.  While it does come with some spare plates, online reviewers reported that they were able to get up to 6 hours of runtime before all plates were depleted.  So this is definitely more of a (very neat) science experiment, and less of a permanent toy.

I would strongly recommend this to anyone who wants to make a car powered by their own battery – you can get it on Amazon for $10 to $15 (depending on sales, etc…).

The second toy that we built was the “4M Salt Water Powered Robot Kit”: 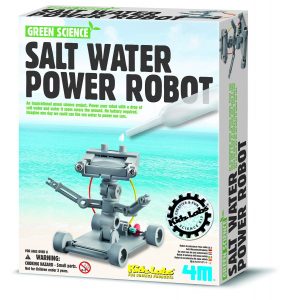 Unfortunately, this was nowhere near as good as the Baja Runner.  It was a lot easier to construct than the car, and my son was able to do most of the construction himself.  Also, It had a much better design for the battery cartridge.  The robot’s battery cartridge did not need to be disassembled when adding salt water. Looking at the design of the battery, I would expect it to provide power for longer than the Baja Runner.  That said, there were two major flaws with this little robot:

The only redeeming factor of the Salt Water Powered Robot was that I was able to salvage the magnesium plates out of it and get them to work in the Baja Runner.  So we will get a couple more hours of play out of it before it has to be abandoned.

So, I would not recommend buying this guy – but would (again) strongly recommend picking up the Baja Runner.