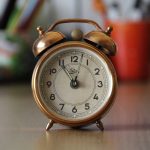 When I talk to people about making the right impact with their emails, people spend a lot of time making sure they choose the right words.  But they often fail to ask themselves an equally important question: Should you send that email right now?

It is easy to feel pressure to send emails as quickly as possible.

Let’s spend some time pulling these issues apart.  I want to talk about some of the downsides of sending that email straight away, and provide some arguments for reasoned delay in sending emails.

You do not have time to think, and will write things you regret

A quick search of the Internet reveals a myriad of quotes and sayings about the wisdom of biting your tongue, and thinking before you speak.  I particularly like this one:

Isn’t it surprising how many things, if not said immediately, seem not worth saying ten minutes from now? ~Arnot L. Sheppard, Jr.

All of this advice applies equally to email.  I am sure that we can all think of times when we rapidly jotted down our thoughts and opinions in email, sent them, and immediately regretted doing so.  There is some quite basic science behind this problem.  For most people their emotional response is faster, and shorter lived, than their logical thought processes.  Send an email reply immediately?  Chances are you are speaking with your emotion.  Wait for a short period of time, even just 5 minutes, and your reply will be more rooted in your logical thoughts.

There are negative connotations that you have not considered

Consider this scenario:  You are at work, and send an email.  You get a response from a colleague almost immediately challenging a statement that you made.  You read it, consider their feedback, and clarify your position.  They respond immediately again!  With an unbelievably large amount of text for the amount of time that they had.  Your brain starts filling with thoughts about this colleague: “Man, they are really worked up about this issue!” “Why do they think this is such a big deal?” “Did they even read what I wrote?”  “What a jerk!”

I think most of us have been here.  And yet, we are also frequently the colleague who is responding immediately to someone else.  And, if we are honest: we are too worked up about an issue, we didn’t really read their reply, and we are being kind of a jerk.

Sometimes everyone just needs a break

Let me tell you about a situation I was recently involved with.

I was CC’d on an email thread between one of my employees and a partner team inside Microsoft that they were working with.  They were discussing the need to schedule meetings, and develop schedules for a joint project we needed to work on.  However, as the day went on the email thread started to deteriorate.  People were not listening to each other, feedback from both sides was being ignored, and everyone was becoming entrenched in their own position and perspective.  My employee asked me for advice in the afternoon – and I proposed some ideas for how to break the stale mate.

They worked on a carefully written email, and felt good about it.  Then at 4:55pm the partner team sent back a scathing response.  So my employee came by my office, exasperated, asking what we should do.  My response was simple.  I looked at my watch and said “It’s 5pm.  We will deal with this tomorrow”.

Why did I do that?  For so many reasons:

In the morning we started the email again, and immediately suggested that we should get together to discuss the topic face to face.  It was peaceably resolved within a couple of hours.

You are influencing your work culture

Do you want to work in an environment where people prioritize email over work?  Do you want people to expect you to be up at all hours responding to email?  Do you want to be constantly arguing with colleagues over email?

Hopefully the answer to all of the above is no.  Have you ever considered that your own actions, and your own email etiquette has an influence on that?

I remember a number of years ago I was out for a business dinner with managers from a number of different companies at a trade show.  We started discussing work place culture – a popular topic for managers.  A couple of the managers started talking about the fact that they were worried about the work-life balance of some of their employees.  They talked about how the employees were great people, and how they loved having them on their teams.  But they were worried that they were working too hard, and that they ran the risk of burning themselves out.

I had just one question for these managers: “Do you ever email your team after hours with new work assignments?”

Both of them answered “Yes”.  They were busy people who spent most of their days in meetings.  They only really had time to go over their own email in the evenings, and this was when they would identify new work assignments that needed to be made.  I pointed out that by doing this, they were implicitly telling their team that they expected them to be online and available at all times.  More over, the team members who were online and working late at night would get a competitive advantage compared to those who only worked 9 to 5.

Neither of them had considered this aspect of their late night email habits.

Now, I must admit that this is something that I fall prey of myself.  I am a night owl who happens to absolutely love my job.  Case in hand – I am writing this blog post at 1am having spent over 4 hours of my free time this evening hacking on virtual machines (super excited for what is coming out in the next Windows update!).  But I have learned a couple of things myself through this:

I have talked to people who were in situations where an important topic was being discussed on an email thread with lots of people.  They wanted to jump right in with an immediate reply so that they could demonstrate leadership.  But this is another area where there is a mountain of traditional advice that extols the values of listening first, and speaking second.

You see, if you are the first to reply, not only have you likely not had enough time to think through your position thoroughly.  You do not know what the positions and opinions are of everyone else on the email thread.

Alternatively, you have likely seen email threads where – after a period of discussion – some one chimes in with: “I have been giving this a lot of thought, and here is my position”.

Who do you respect most in these communications?  Hopefully it is the person that clearly demonstrated deliberated thought in their actions.

Making sure that you communicate the right level of importance

If I find a colleague agonizing over sending an email, a common question I ask is: “Do you have to send this email today?”.  Invariably they answer “Yes!” and I reply “Really?”.  Sometimes the answer remains yes.  But sometimes the answer is “I need to make sure this person knows that I am working on this, and treating it with importance”.

Again, my response to this is simple: “So why not just send an email that says that?”

“Hi <name of person>,  I just wanted to let you know that I am actively working on <important activity>.  It is my top priority right now, and I will have an email to you with detailed information as soon as possible”.

Mission accomplished, and now you can take the time to make sure that the email about this important topic is given the time and attention that it deserves.  I mean, if it really is important you do not want to rush it.  Right?

Making sure you do not forget to send that important email

The final note I want to make on this topic is that yes, there is a valid concern about forgetting to send an email if it is not sent immediately.  We do not always have the ability to schedule email writing time around other peoples schedules.  And as busy people, thoughts often get pushed out of our heads by newer thoughts.  Fortunately, Microsoft Outlook has just what you need here.

If you are not familiar with this feature, it allows you to write an email and hit send, but tell Outlook to wait until a designated time to actually send the email.  This is a feature that I rely on heavily, so that people do not know how late I am up working most nights 🙂

4 thoughts on “Should you send that email right now?”